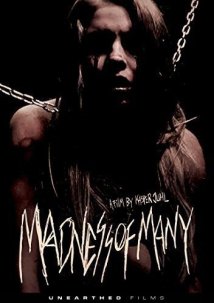 The plot (such as it is) centers around Victoria (Ellen Abrahamson) who we first see walking in the woods in the beginning of the film. We are told through VO that she is 23 and has grown up in the most horrifically abusive home possible. After years of rape and starvation she has recently escaped and now we see her make friends with someone off-screen who brings her back to their home. Things seem to be going well until she is bludgeoned unconscious and spends the next year being held captive and tortured. The bulk of the rest of the film depicts seemingly random other women being tortured who (I think) are meant to represent her inner anguish through depictions of physical torment…..and puking up blood every five minutes.

I’m only pretty sure that’s what’s going on because despite the fact that nearly the entire film contains VO, it seems less concerned with illuminating the details of the plot and more concerned with incessantly repeating its theory that suffering is a transcendent experience that leads to enlightenment. This concept worked in Martyrs several years earlier but that was because it was bolstered up by an excellent plot and a sparing but intense use of violence. The brutality here is certainly the best part but the overuse of it without a solid foundation to stand on makes for diminishing returns. I mean, once you’ve watched someone puke up blood for the fifth time in an hour it’s kind of lost it’s effect.

The fundamental problem here is a real lack of prioritization of the story elements. Sometimes the information is maddeningly sparse, such as how did she get from spending her whole life in tortured squalor to just kind of strolling around in a nice outfit, looking normal and put together? Other times it feels like it’s compulsively berating you with the same information, prattling on about enlightenment and suffering like stoned freshman around a bonfire. This all results in a lack of emotional investment with the events of the film and an attempt at a profound ending that falls flat because it’s not even remotely earned.

This is unfortunate because despite its flaws there are definitely some things that the film does very well. First and foremost, I have to commend the numerous actresses who fully commit to their roles as torture victims and all deliver genuinely great performances. This, coupled with the well crafted gore, makes for some glorious and authentic depictions of violence that are well worth the watch. Additionally, Juhl brings a visual artistry to many of the shots that elevate them from mere set pieces to visually arresting works of macabre beauty.

If only he had spent as much time crafting the story then the end result may have felt more like a provocative art film and less like something made by a film student who took took SFX and intro to philosophy in the same semester.