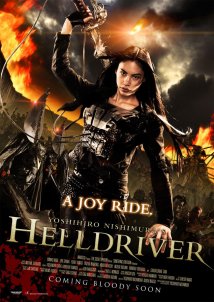 Helldriver is less a “movie”, more an unbridled ride through the cinematic insanity that is Japanese Splatter Cinema. Much like Tokyo Gore Police, this is another film that you are going to need to strap the fuck in for because this visual roller coaster is an example of unhinged, creative brutality at it’s finest.

The plot is as crazy as the visuals but I’ll do my best to distill it. When a freak meteor falls from the sky it releases a mysterious black ash that turns millions of Japanese residents into zombies. Now it is up to badass zombie slayer Kika (Yumiko Hara) to save Japan from the epidemic by going after the zombie queen herself….her mother Rikka (Japanese Splatter legend Eihi Shiina)

So, there it is in very broad strokes but that doesn’t even begin to describe the utter madness of this film. Right from the opening scene that sees a physics-defying truck spinning through the air like a toy and Kika pole-dancing on a zombie’s elongated neck (that’s right, you heard me) it is clear this is a film that is not taking itself too seriously. But that’s okay in this case and this kind of glorious madness is exactly what we’ve come to expect (and crave) from the Japanese Splatter subgenre.

The film is clearly on a mission to start out crazy and just get crazier…..and mission fucking accomplished! Zombie babies are swung on umbilical cords like weapons, severed heads fly through the air to devour people, a working car is made entirely out of severed body parts and much, much more! It all culminates in a battle in space so insane that it practically defies description.

The film is also violent, really, really violent. Torture, cannibalism and endless geysers of blood all play out onscreen in incredibly graphic detail despite the film’s shockingly low budget. Naturally, many of the effects have the sort of low budget aesthetic you’d expect in Japanese Splatter but the sheer creativity on display here more that makes up for it and just add to the campy fun.

And campy fun is really the key here because that is certainly the intention of director/co-writer Yoshihiro Nishimura. There is definitely a very different tone here than the grim torture-porn films like Grotesque and despite all the bloodshed, it never loses it’s sense of careless fun amid the carnage. For some, it would be easy to dismiss such a film as meaningless visual stimulation but the fact is that it knows exactly what it wants to be sticks with it a hundred percent. The characters are actually very well defined and solid and even with a two hour running time the film never feels drawn out or boring.

So if you think you can handle taking a trip through a world of gruesome, next-level insanity then grab a few beers and hitch a ride with Helldriver, you won’t be sorry you did! 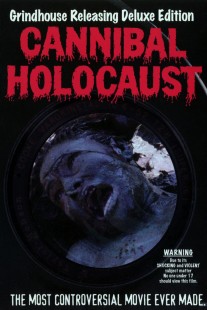 Truly, no discussion of the most notorious, disturbing films of all time could possibly be complete without the inclusion of Cannibal Holocaust. Even thirty-six years later, the film remains banned in a number of countries and was so controversial upon it’s initial release that director Ruggero Deodato was arrested shortly after the 1980 premier in Milan. However, the charges were eventually dropped once he was able to prove that this was not an actual snuff film and all the actors involved were in fact still alive. So, does the film that many have dubbed the most controversial of the 20th Century live up to it’s reputation and still manage to be shocking decades later? Well, let’s discuss.

In addition to being notorious for it’s graphic content, Cannibal Holocaust is also credited as being an early pioneer in utilizing the “found footage” technique that has become such a prevalent part of modern horror, which is itself a very worthy contribution to the genre as a whole. The story centers around anthropology professor Harold Monroe (Robert Kerman) who goes deep into the Amazonian jungle in search of a missing documentary crew that was making a film about mysterious cannibal tribes in the rain forest. But instead of the documentarians, he is only able to recover their footage which he brings back to an American TV station that wants to broadcast it. Monroe however has serious reservations once he discovers the truth about what is actually contained on those reels.

As the other reviews on this site will indicate, I am certainly no stranger to disturbing cinema and in fact have made it my mission to track down and review all of the most twisted, fucked up films ever made. I couldn’t possibly be a more ardent defender of free speech and have thoroughly praised controversial movies like A Serbian Film, The Human Centipede and others for their bold, inflammatory filmmaking. However, there is a very important difference between Cannibal Holocaust and most other controversial films which is also at the center of the ongoing controversy surrounding it…the real, unsimulated killing of animals on film.

Now, one thing I do want to clarify is that this film was made in 1980 and in the decades preceding that the practice of really killing animals onscreen was surprisingly commonplace and did not carry with it the incredible stigma that it does today. Even mainstream movies like Thunderball, Patton, Apocalypse Now, Cool Hand Luke and many others featured scenes of animals actually killed onscreen in service of the storyline. Despite this, the abundance of animal deaths, as well as the incredibly graphic ways that they are killed, make Cannibal Holocaust stand out as exceptionally brutal and cruel. So much so that years later Deodato himself even expressed regret for his actions.

More than anything else I have reviewed, this film really provides an opportunity to discuss the question “Is there a such a thing as going too far when creating art?” For me, the answer really comes down to one simple word…..consent. Consent is everything when deciding what can and cannot be shown. Consent is the difference between sex and rape and the difference between a boxing match and an assault.

I am a very firm believer in the idea that anything people want to express in art can and must be allowed to be expressed but with the important stipulation that if it is violent or sexual, it occurs between consenting adults. If all parties do not (or cannot) consent to what is happening, than what is happening is not okay. This is why filming actual instances of rape, murder, child sexual abuse and animal cruelty is rightfully illegal but fictional depictions are not only acceptable but an important part of coping with the real life horrors we face in the world every day.

People often cite A Serbian Film as the most disturbing film of all time primarily because of the depictions of children being sexually abused. While this idea is in fact disturbing, as it was intended to be, it is also still simply an idea, a fictional depiction. This also goes for other disturbing imagery such as the graphic rape scene in I Spit on Your Grave or the violence depicted in pretty much every horror movie ever made. As horror fans, we enjoy the depictions of violence because we are able to know in the backs of our minds that what we are seeing is simply an illusion and no real harm is being done. On the other hand, anyone who revels in the genuine suffering of others has truly lost their humanity.

Featuring actual cruelty also undercuts any kind of statement you are trying to make with the art itself. The underlying messages of the cruelty of a “civilized society” that feels entitled to abuse indigenous people and nature itself in this film is completely deflated by the fact that the film itself is responsible for such abuse. Beyond this, I also find real violence to be a cheap tactic to illicit a visceral response. Any asshole can shock you by killing an animal and filming it but when a film is able to horrify you to your core simply by creating a realistic illusion that is something to be admired.

To be fair though, there is a lot more in this film beyond the few scenes of animal cruelty and I wanted to see how effective it was as a whole. The special edition DVD actually offers a version where the animal deaths are removed so to compare it I watched both that and the uncut version. Without those scenes the film is still incredibly disturbing and more than most people could handle. Aside from numerous scenes of graphic rape there is also a lot of brutal carnage. The infamous scene of the impaled woman is a gorgeously realized effect as is the scene of the man’s cock being viciously cut off.

Despite my feelings for the unsimulated violence in this film, I do not advocate for it’s censorship and (like the apologetic warning before the film) view this as an historical document depicting a bygone era that hopefully won’t be repeated. This is the only time I would actually recommend watching a cut version of a film but if you do, you will see a movie that is surprisingly well acted, holds your interest and features a great film score. However, you are also sure to notice some shoddy ADR work, weak character development and a plot that is noticeably thin when not propped up with the shock-value of real death. Ultimately, without the use of the cheap shock effect of animal cruelty, the film would never have earned the level of controversy it did or it’s notorious place in film history. On the other hand, it would have still been a disturbing piece of art who’s message wouldn’t have been drowned out by it’s own hypocrisy.