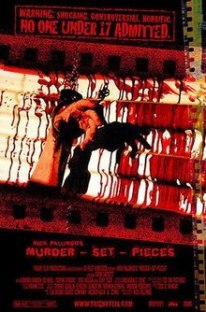 To anyone who has taken so much as a cursory glance at my reviews it should be abundantly clear that I am an incredibly strong supporter of free speech. I’ve made it my mission to track down and review the darkest and most fucked up films ever made and I revel in witnessing cinema’s most disturbing creations. This is all to say that it’s extremely rare that I come across a film with parts that even I find problematic, but it does happen. A classic example would be the unsimulated animal killing in Cannibal Holocaust whose artistic value is superseded by the real world suffering caused by their creation. It had been a long time since I’d seen Murder Set Pieces, so I was surprised to find a similar moral predicament as I wondered to myself “Wait, is this a fucking pro-Nazi film?” More on that in a minute.

The film itself is very light on actual plot and essentially just follows around an unnamed professional photographer (Sven Garrett) as he brutally murders women in Las Vegas. Despite the fact that he’s racking up a substantial body count, the only person who is even remotely suspicious of this obvious sociopath is his girlfriend’s little sister, who is determined to find out what is really going on.

Now, if you are going to have a villainous, evil character, a Nazi or Nazi sympathizer is certainly a good choice and as such have been used effectively in many other films. In the case of MSP though it feels very…..different and not just because the protagonist is openly supportive of Nazis and screams in German while he kills people. By themselves these traits could be passed off as simply being used to enhance the evil nature of the character, but when you also start your film with a strange quote about “the Jews” and use a production company named Third Reich Ventures (!) shit starts to add up.

To be fair, this film was made in a different time, years before a peaceful frog was co-opted into an official symbol of hate speech by armies of trolls seeking to make racism “great” again. If I was to play devil’s advocate I could say that it is possible that writer/director Nick Palumbo was perhaps using the imagery more in service of shock value than promoting an ideology.

However, this more generous read of the subject matter is a tough sell considering how the entire film feels like little more than a vicarious indulgence of Palumbo’s darkest fantasies.

In scene after scene the strong, good looking protagonist is able to effortlessly pick up beautiful women and viciously fuck and murder them in a seemingly consequence-free environment. In addition to this, this unnamed photographer uses nearly all his non-German dialogue on misogynistic rants or fawning praise for Nazis. This is of course when he isn’t busy working out while Triumph of the Will plays in the background. It’s really unfortunate that these things had to be so pervasive within the film because despite the numerous problematic elements there is actually a lot that MSP does very well. 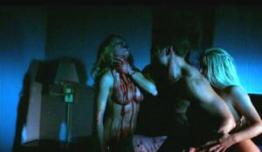 From a visual standpoint this film is absolutely stunning and Palumbo makes excellent use of his two million dollar budget to create mesmerizing visuals on 35mm film stock. Side note, this film also has the bizarre distinction of allegedly containing the only known 35mm footage of the WTC towers going down on 9/11, for whatever that’s worth. Anyway, horror fans don’t just come for the pretty pictures though, we come for the gore and on that front MSP delivers incredibly well. So well in fact that the film was thrown out of three labs before finally being processed.

Thankfully, it was eventually processed because the director’s cut of this film has some of the most gorgeous and gruesome gore effects ever put to celluloid. Each murder scene is exquisitely crafted to showcase the raw, visceral bloodshed in all it’s glory. 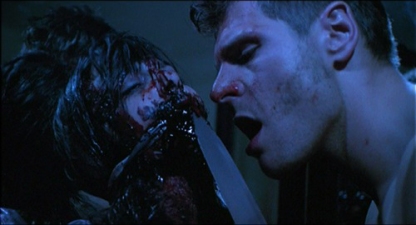 The chainsaw to the head scene stands out as a particular highlight but whether it’s a brutal throat slitting, bathtub drowning or vicious beating each violent scene is filled with a raw, vicious energy that makes the kills much more realistic and disturbing. Throw in some corpse eating, severed head fucking and a brutal on-screen child murder (!) and what you get is a truly unfiltered example of Extreme Cinema that goes well beyond where conventional horror films dare to venture.

So, in the end there is a lot to like about MSP and if it hadn’t been infested with Nazi propaganda it would be an easy film to recommend to fans of hardcore cinema. Overall I’m left feeling conflicted because as much of a fan as I am of the gorgeous, unhinged violence I just can’t fully endorse a film that seems like it would be a top pick for a neo-Nazi movie night.