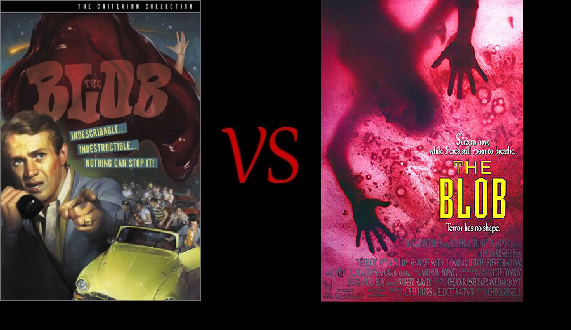 It’s hard to imagine a film that embraces the notion of a campy Creature Feature more than The Blob. Just by the title alone you know exactly what you’re in for. Despite being incredibly well known films, there actually is not a contemporary remake of this story, although there is rumored to be one in development that would star Samuel L Jackson (!). So, as of this time we have the 1958 and 1988 versions, each very emblematic of the time period in which it they were made.

The story in both centers around a meteor that crashes in the woods outside of a town and releases a gelatinous creature that absorbs and devours the residents. Both films also feature an old man as patient zero and center around teen protagonists who discover and bring him to the doctor, which is where the mayhem really begins. However, at that point the similarities pretty much end.

Now, I know the original was made in the era of campy drive-in horror and special effects knowledge was very limited at that time. That being said, there are still quite a few aspects that could have been greatly improved upon. For one thing, all of the “teens” in this film look like they’re about 35. This actually makes sense because in reality stars Steve McQueen and Aneta Corsaut were 28 and 25 respectively when the movie was filmed…..and it shows. There’s nothing that shatters even the vaguest illusion of realism like “man-child” McQueen blubbering to the cops to not tell his daddy that he was out hot-rodding. When you couple this with the painfully stagy ’50’s acting, you end up with characters that are distractingly unrealistic and completely unrelatable.

The remake on the other hand establishes characters that not only look age appropriate but are surprisingly well-developed with minimal exposition. There is a general feeling of ’80’s cheesiness of course but for the most part the characters are played straight and realistic enough to make you feel emotionally invested in the story. The remake also does a far better job at having a logical justification for why most people are initially skeptical and reluctant to accept what’s happening. This is in stark contrast to the irrational insistence by the cops in the original that those crazy “kids” are pulling one heck of an elaborate prank on old Johnny Law.

Since this is a Creature Feature the quality of the creature itself naturally plays a pivotal roll in selling the scares in the film. This is another area in which the remake out-classes the original with an amorphous creature that presents as a truly threatening monster rather than something that alternately looks like a giant piece of half-chewed candy and a sad bag of jello. The remake also makes great use of practical effects, delivering some truly amazing gooey, gory kills in all their wonderful ’80’s glory.

The original also could have tightened up some of the writing which was confounding even for the era. One of the best examples of this is when the fire chief notices the diner that people are trapped in the basement of is on fire and casually asks the sheriff if he has any ideas on how to put it out. (!) He then follows that up with pretty much “Ah, that fire will probably burn out in 10 minutes or so”. (Never mind that the people will most likely burn to death by then. How did he get this fucking job!?)

I mean, the bad writing is good for a few unintentional laughs of course. For instance, the scene when the nurse throws a bottle of acid on the blob, that of course does nothing, and then declares “Dr, nothing will stop it!” (you’ve tried exactly one thing, one.) Obviously he then he tells her to stay in the room she could easily escape (!) while he gets his gun and we’re then treated to one of the lamest deaths in film history.

All these kinds of issues could be overlooked however if the original provided an overall film that was an enjoyably campy, fun ride. Unfortunately, it just doesn’t. There simply isn’t enough to make it fun and the slow pace, shoddy ADR, poorly staged action, bad dialogue and lack of anything even remotely close to frightening make this a wholly unsatisfying experience. On the other hand the remake gives you exactly what you’d expect and want from a film like this which is a fun, gory monster flick that holds up surprisingly well after almost thirty years. 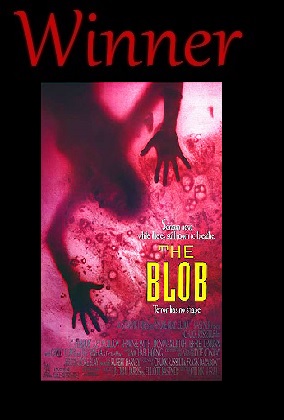 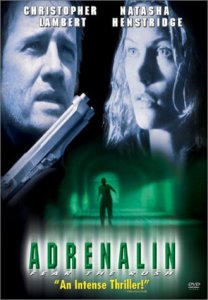 I first saw Adrenalin: Fear the Rush back in the late 90s and at the time, I was blown away. I remember thinking it really lived up to it’s title (not so much the subtitle though, that’s just fucking stupid.) Naturally I was very curious to see if it still held up because let me tell you, a lot of shit has changed for me since then. For one thing, I’m watching a lot more horror and a lot less (ahem) Brendan Fraser films…..

The film takes place in 2007 after an epidemic has wreaked havoc on Europe (you all remember the great European outbreak of 2007 right?). Natasha Henstridge (Species) plays Officer Delon, a cop in an internment camp in Boston for new European immigrants set up to keep them quarantined and prevent the epidemic from spreading. When an infected man goes on a killing spree it is up to her and a small group of officers to track him down and kill him before he becomes highly infectious and starts an outbreak that would have catastrophic results. Christopher Lambert (Highlander) shares top billing (back when he could do that) as one of the other officers who joins Delon in pursuit of the infected maniac.

The first thing I’ll say about this film is it doesn’t fuck around. You get just enough exposition to set-up the story and then you’re off with Delon chasing the deformed madman through claustrophobic tunnels and dilapidated buildings. Relationships between characters are established but the film doesn’t dwell on them in an overly-sentimental way which helps keep the pacing tight.

I do have to mention that clearly this is not a high budget film but director Albert Pyun wisely plays to the film’s strengths by focusing on a small cast in a confined environment rather than attempting extravagant scenes that he couldn’t pull off with the available budget. Now, I know that Pyun is someone who has been savaged by the internet over the years (even compared to Ed Wood, the ultimate insult) and while I can’t speak for his filmography in general I do have one thing to say about this one….it works.

There is without a doubt a palpable sense of tension and dread as Delon and company chase down the killer through effectively creepy sets. This definitely looks like a case where Pyun found existing locations that worked for the film rather than trying to build something that just looked dilapidated and ultimately came off as fake. The use of shadow and lighting also works very well and this is certainly a film best enjoyed alone in the dark.

The antagonist is mostly shot from the back or in shadows which works well as a method for making him more ominous and is also good because his contacts look incredibly fake when seen in a close-up. There are of course other aspects of the film that are less effective as well. Christopher Lambert is, well, about as good as he ever is and there is sometimes an inconsistent sense of space within the buildings. This is most apparent when characters freak out because they are being locked in a room only to casually walk out in the next scene as though it never happened. It should also be noted that the image quality, prop design and supporting cast keep you reminded that the film was made on the cheap.

All in all though this is a solid film that’s well worth watching despite some flaws. It has what it needs where it counts and regardless of any preconceived notions you may have about Pyun, I would certainly recommend this journey into the dilapidated depths of the city.

Sick Flix is now on Facebook.  Check out the page here and follow to get updated when new reviews are posted.