Ahhh, the found footage sub-genre, staple of the independent filmmaker. Some entries are notable and utilize that technique for innovative storytelling, but many others are simply trying to cover up low production values and a lack of budget. Ever since The Blair Witch Project exploded onto the horror scene in 1999, and raked in a quarter of a billion dollars on a $60,000 budget, filmmakers have been trying to capture a piece of that low-cost, high-profit magic.

With Unlisted Owner writer/director Jed Brian puts a slight spin on the well-worn formula by revealing through on-screen text at the start of the film that the following footage was gathered from five separate cameras and edited together by the police. The footage itself reveals the series of events that took a group of friends from an ordinary camping trip to a harrowing fight for survival inside the house of a recently murdered family.

Initially, I thought that the concept of stating that the footage had been edited together by the cops was a novel way of justifying the fact that there was intercut footage that couldn’t possibly have come from one camera. However, this device creates as many problems as it solves since it leaves the viewer wondering why the police would re-cut evidence in a murder investigation in such a titillating and dramatic fashion. Also, I’m pretty sure that editing down raw footage of a crime into a feature length video isn’t a service that the police provide.

Ultimately, that’s a minor quibble though, because it’s really what’s on the footage that counts. To that end, I did appreciate that Brian made the characters feel as real as possible and realistically captured the shit talking and ball busting that occurs when guys hang out. I also liked that an effort was made to make the characters feel like a group of real people rather than having each of them embody a single cliched character trait.

I always appreciate it when indie directors know their own limitations and play to their strengths rather than trying to recreate a high concept Hollywood production on a fraction of the budget. In this case, Brian wisely sticks to minimal locations and uses tension and practical effects to pull off some solid, bloody kills toward the climax of the film. Once the blood starts being spilled it becomes quite entertaining but the lack of immediate danger throughout most of the lead up makes the pacing suffer a bit.

This brings me to the central issue with the film which is despite a seventy-four minute runtime, the lack of imminent threat to the central characters for much of the movie results in it feeling overly long at times. This is not helped by scenes where characters repeat exposition we’ve just heard, and makes a strong case that, ideally, this could be cut down to a tight thirty minute short. But regardless of the pacing issues, the final result manages to be an entertaining enough way to spend seventy-four minutes. 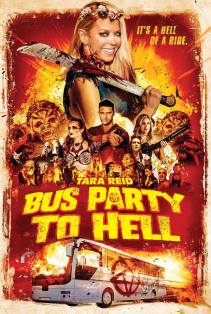 When a movie is titled Bus Party to Hell and features a masterclass thespian such as Sharknado alum Tara Reid, you have a pretty good idea what you’re in for. Of course, there’s nothing wrong with an over-the-top film that doesn’t take itself too seriously, provided it’s actually enjoyable to watch. There’s a surprisingly thin line between outrageously fun and irritatingly stupid and today we’ll see if BPtH falls more along the lines of the campy, gory fun of Father’s Day or the interminable slog that is Kudzu Zombie.

The film stars Tara Reid and by stars I mean she is in it for literally ten minutes before it shifts focus to follow a group of cliched caricatures of party-goers on a bus that’s en route to Burning Man. When the bus breaks down and the driver (Sadie Katz, whose raspy voice makes Tara Reid sound like a velvety seductress by comparison) is nowhere to be found, things quickly go bad for the passengers as their bus is descended upon by a group of cannibalistic maniacs.

When a film plays out like a softcore porn rip-off of The Hills Have Eyes, the one thing I would hope is that it’s at least fun. Unfortunately, what we have here is a series of tiresome scenes that serve no purpose other than to get you to the next cheap kill or an excuse to strip down the actresses. The script itself is treated with about as much respect as the female characters as the actors spew out cringe-inducing attempts at humor, regardless of the peril they are in. Given that each character’s entire personality can already be summed up by a single word (nerd, virgin, rich) it makes actually caring about anything that happens utterly impossible.

The biggest problem here is that if you are going to eschew plot and story in service of showcasing sex and violence, then you need to bring it when it comes to those areas. This is why the American Guinea Pig films and Portraits of Andrea Palmer work so well despite having very little plot, they are willing to lean into the edgy content instead of just paying lip service to it.

Despite all this, the film is not without some positive attributes. The gorgeous establishing shots of the desert remind us that, had the filmmakers cared enough to include interesting and even somewhat grounded characters, they could have easily made a very watchable movie. In addition, even though many of the blood gags look generic or just plain silly, the scene where they cut a woman open and pull a live snake out of her belly actually worked quite well. Still, the end result feels like something that was conceived of and shot at Burning Man over a weekend and was (hopefully) a lot more fun to make than to it was to watch. This is certainly one bus ride that you are better off letting pass you by.

Creating a surreal film that really works is an incredibly difficult feat. In the hands of masters like Lynch and Jodorowsky the final product can be a multilayered work of art with symbolism and subtext that will have people in spirited debate for decades. On the other end of the spectrum are the myriad of films that bombard the viewer with “weird for the sake of weird” imagery, with no inherent meaning or intent, and no subtle clues to decipher what’s going on until we are simply told. Any surreal film is bound to fall somewhere along this line and today we’re going to see how close to the top (or bottom) The God Inside My Ear ends up.

The film opens with a montage of strange, seemingly unconnected images, underscored by sinister music that culminates in two people in hazmat suits working on a dusty control panel in an abandoned looking room. After this, the movie is segmented into chapters and follows the story of Elizia (Linnea Gregg) who’s life begins to become more unhinged and surreal after she is suddenly dumped by her boyfriend.

The opening minutes of a film can reveal a lot about what you’re in for and one thing that stands out immediately about TGIME is how incredibly well shot it is. The image quality is rich and beautiful, the shots are well framed and artistic, and the use of disorienting video effects and colored lighting does an excellent job in creating a surreal, unstable feeling when needed. Writer/director Joe Badon certainly has a keen visual sense and there’s no question that the cinematography of this film is beyond reproach.

Of course, the look of a film is only one piece of the puzzle, as we also have to take into account the quality of acting and the backbone of the movie itself, the script. The results for the former are a bit varied as some actors deliver solid performances and others belie the professionalism of the footage quality with stilted, unnatural delivery. Although, to be fair, at timesit can be hard to tell how much responsibility can be attributed to the actors when so much of the dialogue is awkwardly constructed and full of attempts at comedy that fall completely flat.

TGIME starts to become a bit more interesting as it progresses, shifting tone from awkward “comedy” into surreal, light-horror. The main problem here is that the first act, which was supposed to create a baseline for the characters and their reality, is instead spent doing tired shtick that ultimately made me less invested in the outcome. Even so, TGIME does become more watchable as Elizia’s reality becomes more warped and viewers can expect to be treated to some well-constructed and delightfully bizarre imagery.

It should also be noted that this film does in fact have underlying meaning to the images and the reveal at the end sheds light on the story that preceded it, as well as make you think about the clues that were given along the way. However, while the reveal does serve to better explain what was happening, it also raises some very important practical questions that it leaves unanswered, which I can’t go into further detail about without spoiling the twist. What this all adds up to is a visually stunning film with an interesting (although not wholly original) concept and a script that could have been compelling with another rewrite, or three.