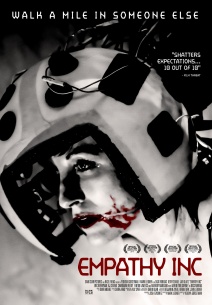 As new forms of media consumption are released so too are new cultural anxieties born, along with the films that reflect them. Whether it’s VHS in Videodrome or cell phones in One Missed Call, films have always been a way of expressing the inherent discomfort that is an inevitable part of adjusting to ever more rapidly changing technology. With VR becoming an increasingly prevalent part of our society, it’s only natural that films like Empathy Inc would come about to explore the darker side of the technology. Of course, the idea itself is nothing new and classic films from Total Recall to The Matrix and many in between have delved into the potential consequences of experiencing a virtual world that is indistinguishable from our own. However, while this was an abstract concept in the ‘90s, ever advancing technology is bringing us closer to this becoming a reality, making the subject far more prescient today.

The story centers around Joel (Zack Robidas) who has to move with his wife Jessica (Kathy Searle) from Silicon Valley to her parent’s house on the east coast following a public scandal and the closure of his company. When an opportunity comes along to get in on the ground floor of a new company that promises a unique VR experience, Joel sees it as his way to get back in the game and convinces his father-in-law (Fenton Lawless) to invest his family’s entire nest egg in the venture. As you can imagine, it’s not long before things start to go horribly wrong.

Of all the VR themed films, Empathy Inc draws the most influence from Strange Days as its invented technology also allows users to enter a fully immersive world where they can live out experiences that are completely foreign to their own in a supposedly consequence-free environment. It does put its own unique spin on the concept (which I won’t spoil here) that makes it feel like a fresh take on the subject rather than a rehash. Unfortunately, this unique take also brings up some important questions that are not resolved like “given all that’s involved, would people really pay for this experience?” Even if they would, the logistics of actually pulling it off seem highly impractical and regardless of how far out your concept is, it needs to be grounded within the logic of the world it creates.

Despite some glaring inconsistencies with how it’s used, the technology itself is actually an easier sell than some minor but significant plot points that could have been easily addressed in a rewrite. I mean, I’m more than willing to suspend disbelief for the idea of world where fully immersive VR is possible but a world where you can easily sneak a gun onto a cross-country flight (twice) is just far too ridiculous to accept. This is also apparently the same world where you can wander around a city and accidentally run into the exact person you are looking for by pure coincidence.

It’s really a shame that these entirely script-based issues exist because they take away from a film that is otherwise executed incredibly well. The camerawork is beautiful and the black and white aesthetic works very well, especially for the high-contrast shots. Director Yedidya Gorsetman also wisely chooses to keep the effects simple and execute them well which adds much more production value than attempting to overreach far beyond what the budget allows. I would also be remiss if I didn’t mention the acting which is simply flawless across the board and especially impressive given the events of the third act.

All in all Empathy Inc is an interesting film with a unique perspective that is worth the watch but certainly won’t be supplanting VR classics like eXistenZ or Strange Days anytime soon.