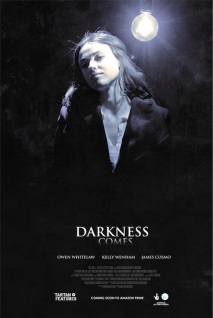 The incredible advances in digital technology over the last few decades have made it more possible than ever for aspiring and indie filmmakers to make their vision a reality, or at least attempt to. Freed from the burdens and excessive cost that goes along with shooting on film stock, many indie directors will attempt to replicate the lavish production values of multi-million dollar films with elaborate DIY sets and numerous on-screen characters. This almost always results in a disastrous final product but is still a far more common practice than the more sensible approach of using a small cast and a primary central location.

There are, of course, plenty of indies that do understand the importance of a more contained, focused approach and with only three characters and one main location, Darkness Comes is certainly one of them. However, a more intimate approach also amplifies the importance of the acting and storyline, so let’s see if this method ended up proving successful in this case.

The film starts with a young, attractive couple Eddie (Owen Whitelaw) and Suze (Kelly Wenham) well on their way to hooking up in a strange, abandoned looking room. However, things quickly take a turn and it becomes apparent that Eddie is in for a very different night than he had been hoping for.

When I first noticed that this film only had a runtime of 67 minutes (!) it did make me skeptical about what exactly was in store for me with a story that was going to fall awkwardly between the lengths of what can be considered a short and a feature. In this age of digital streaming though, films no longer need to adhere to the same kind of strict parameters that they once did and upon completion I realized that this was the perfect length for the story that was being told.

In fact, if it had been padded with another 20 or 30 minutes to simply achieve feature length, it would have spoiled the tight pacing and engaging plot of what turned out to be a very interesting movie. But it’s not just the pacing that makes this successful, the excellent acting, beautiful camerawork and simple yet brilliant special effects makes this a film that really fires on all cylinders. Director David Newbigging also makes excellent use of the single location and keeps the story feeling fresh and engaging within the confined space.

That’s not to say there aren’t still a few blemishes to be found. Between the thick accents of the cast and a background audio mix that threatens to drown out the dialogue at times, it may be a good idea to turn the subtitles on for this one. There were also some minor instances of inconsistent character motivation but neither of these issues loomed large enough to really take away from the overall experience.

It’s always refreshing to see a film that really knows how to play to its strengths and understands its limitations. Newbigging also uses the concept of an ominous, unseen horror to great effect and the FX that are used are simple and well executed. The film itself may be a bit more on the abstract side for those seeking a mainstream horror experience but for viewers want to indulge in an unusual and exceptionally well crafted film, this is an indie movie that gets it right.