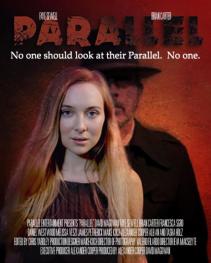 The idea that alternate realities could simultaneously exist in the universe is certainly an interesting one and a concept that has become ever more pervasive in the popular consciousness of late.

However, much like the concept of time travel, it can also become somewhat of a quagmire for writers seeking to apply logical explanations to a concept that defies conventional logic. Regardless of it’s setting though, good storytelling is always king and the films that maintain a compelling, character-driven core while exploring unusual concepts are the ones that are really worth your time. Conversely, films that don’t, will simply collapse under the weight of their facile ideas and today we’ll see where Parallel falls on that spectrum.

After formally meeting at a party, co-workers Heather (Faye Sewell) and Neil (David Magowan, also the screenwriter) begin their seemingly perfect relationship. After a chance meeting with a self-proclaimed psychic named Machlis (Brian Carter) the couple soon finds themselves voyeuristically peering into a parallel version of their lives, to see what much darker versions of themselves are up to.

The very concept of this film is based upon the idea of there being “light and dark” versions of each of our lives playing out in simultaneous timelines, which is exactly the kind of intellectual quagmire I was referring to earlier. The very idea that there could be a “good” reality and a “bad” one is the kind of thing that sounds cool at first and then completely unravels as soon as you start to think about it. Sure, you can show a few isolated characters with alternate versions of themselves engaging in more morally questionable behavior, but what about the world at large? The implication seems to be that the protagonists exist within our normal reality, not some kind Utopian version, so are we supposed to swallow the idea that we live in the good version!? At this point I would like to introduce Magowan to a little thing called the news….

Despite all the real world horrors that plague our planet, it makes just as little sense to say we are collectively an amalgamation of all the worst versions of all the people who have ever lived. The concept of infinitely branching parallel universes is interesting but the idea that they could be distilled down to two oversimplified versions is just ridiculous. Frankly, it takes a very privileged perspective to look around at the world we have and think “wow, what if there was a bad version of this….”

Now, concept is a big factor but so is execution and in the case of this film the results are varied. Overall, the most positive aspect of the production is the acting. Carter especially shines as the somewhat put-upon psychic who may have more up his sleeve than he initially reveals. Sewell also does a very solid job with the material she is given and handles her character’s emotional range skillfully. From a technical standpoint, the film is decently shot but does run into some the classic pitfalls that plague inexperienced filmmakers such as occasionally clumsy edits and some noticeably bad instances of sound design.

Those issues aside, the film as a whole does a decent job of holding your attention, especially as the more debaucherous elements start to come into play. It’s a creative concept with a decent execution that simply suffered from a series of rough edges through all aspects of production. A few tweaks to the central concept, some more natural dialogue, and a smoother edit and this could have been a very interesting film indeed. Too bad we don’t have that cut of the movie, maybe it exists on a separate timeline.