One of the defining films of the New French Extremity movement, Martyrs, is a brutal endurance test that is not even remotely concerned with appealing to mass audiences or casual horror fans. Inspired in part by American Torture Porn films of the time like Hostel and Saw, writer/director Pascal Laugier has also credited the severe depression he was experiencing at the time he wrote this for its incredibly dark and nihilistic tone. While the raw, visceral depictions of suffering on display mean that Martyrs easily earns its Extreme Cinema stripes, the more important question is, of course, how well it actually works as a film.

The movie opens with a young girl, Lucie, who is bloodied and clearly abused, escaping from a building in an industrial area and running screaming down the street. She is subsequently rescued and raised in an orphanage but the bulk of the film takes place fifteen years later. Now, adult Lucie (Mylène Jampanoï) aided by her best friend Anna (Morjana Alaoui) is hell-bent on seeking revenge on those who abused her and believes she has finally found the culprits.

Since one of the best parts of this film is how unconventional and unpredictable the plot is I am going to give an official **Spoiler Warning** here for the remainder of the review. This is definitely a film that is best watched with fresh eyes and if you haven’t taken the time to watch it in the nine years since it’s release you should absolutely stop what you are doing and immediately experience it. As far as Extreme Cinema goes, this one is essential viewing.

Many films depict violence, but what sets Martyrs apart from most is how effectively it depicts suffering. Lucie herself is besieged by a demonic woman, a literal embodiment of her emotional anguish who repeatedly attacks her in viscous, horrifying ways.

Although represented as a separate entity, the film does eventually make it clear that she is a manifestation of Lucie’s internal pain and Lucie’s desire to be rid of her is the central driving force for her to murder those responsible for her abuse.

Another example of exquisitely represented suffering, comes in the form of the severely abused woman that Anna finds in the secret facility under the house. Seeing Anna trying to help someone whose life has been reduced to a state of severe and prolonged agony is perhaps the most upsetting part of this extremely disturbing film. Even though many films feature kills that are graphic and gory, the fact that Laugier dwells on the aftermath of extended suffering (both physical and emotional) makes the scenes in this film far more effectively disturbing.

It should also be noted that, in and of itself, graphic, brutal violence in a film is not necessarily something that is disturbing to see. When it’s done cheaply and poorly it ends up creating the opposite effect and comes across as laughable and silly. For violent scenes to deliver the proper impact on the viewer they have to be well done and the expert craftsmanship of this film is exactly why it ranks up there with disturbing masterpieces like A Serbian Film and Salo. This is due in large part to the incredible cast, every one of which down to the most minor parts delivers absolutely flawless performances. Laugier clearly understood that, regardless of how talented your leads are, amateur acting from ancillary characters can completely shatter the illusion of reality that has been so painstakingly crafted.

Another major reason that the violent scenes are so effectively disturbing is because Laugier wisely relies on expertly made practical effects rather than CGI. The result is a film that was not only shocking when it was made but still holds up perfectly nearly a decade later, and will for years to come.

This is all within the structure of a brilliantly crafted script, which boldly bucks the conventions of a standard narrative, to keep you on your toes as the unpredictable plot develops. It even goes as far as (remember, spoiler alert) shifting protagonists halfway through, a risky move that completely pays off. The script also features one of the best sucker-punches in cinema history when the normal, affluent family is brutally gunned down by Lucie, seemingly out of nowhere. This is an outstanding example of a filmmaker carefully establishing a sense of safety and normalcy for the viewer, only to shatter it in the most jarring way.

As well written as this film is though, there is a glaring issue with the script that absolutely should have been resolved prior to shooting. After Anna meets Lucie at the house where she has just murdered an entire family that she believes was responsible for her torture, the two women don’t leave. I understand how from a plot perspective it was important that they remain in the house, but I fucking wish Laugier had devised a solid, logical reason for them to stay. It just stands to reason that anyone committing a quadruple homicide would try to get the fuck out of Dodge as quickly as possible and not, ya know, hang out, make phone calls…..take naps. It’s a baffling oversight in an otherwise incredible screenplay and really the only significant flaw with the whole production. 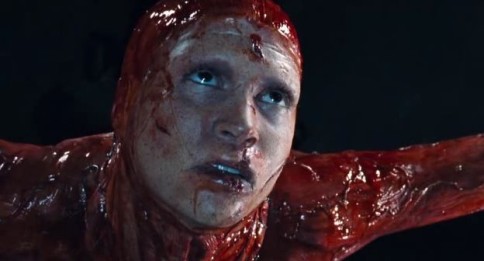 There is just so much to unpack here, especially when it comes to the secret society; their quest for transcendent knowledge through extreme suffering, the casual way they inflict violence like it’s a routine job, and of course the brilliant end when the matriarch is so rattled by knowledge of what is actually awaiting us in death, that she takes her own life. Suffice to say, this film is a unique, complex and exquisitely crafted piece of highly disturbing art that ranks among the most brilliant horror films ever created.