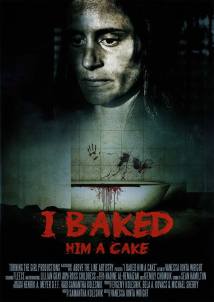 Creating a short film that tells an interesting and compelling story within the span of minutes can be challenging. Shorter films don’t have to hold the audiences attention for as long but also have less time to develop the plot. In the case of I Baked Him a Cake, the running time of only five minutes requires that a lot of story is packed into a very short amount of time, so let’s see if director Vanessa lonta Wright is up for the challenge.

The first thing that I noticed with this film is that it’s very professionally shot and the opening scene sets the tone with some great high-contrast shots and excellent sound design. It also helps that the first shots are very engaging and leave you eager to see how it will play out. Of course, bad acting can instantly derail even the most interesting stories, especially when only two actors are involved. Luckily, in this case, both actresses do an excellent job with their respective roles and imbue the scenes with the realism, tension and underlying menace that is needed.

Everything here is competently done, so my only real complaint is that I feel like the film shies away from gore in some key places. Aside from the blood-soaked bathroom, we don’t really see any, and rather than having the opening scene represented with shadows, it would have been more effective to show a nice, graphic practical effect. I also felt that the ending was a bit abrupt and would have benefited from having a gruesome reveal to close it out instead. Obviously, these were stylistic choices made by the director, but unless there is a strong reason not to, it’s always best for horror films to really lean into the gore and violence, and it looks like this production had the means to do so.

It also could be that the film is deliberately open-ended in order to expand the story more with a future work. I’m hoping that the latter is the case, as there are a lot of questions about motivation and what happens next that would be very interesting to explore.

Thematically, the film brings up some interesting ideas such as how much influence a caretaker has over a child who must look to them to provide a sense of normality, even in a very abnormal situation. In the end, this is a short but sweet film that packs a surprising amount of emotion into its tiny runtime and actually made me feel for the character of the daughter quite a lot, which is not an easy feat to pull off in something that’s the length of two movie trailers. It also made me want to see more about what’s going on in these characters’ lives and look forward to hopefully seeing what Wright can do with a feature some day.