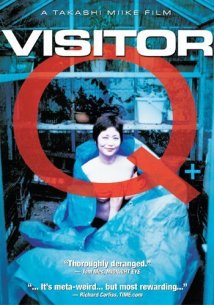 Is it possible to have a film that features incest, necrophilia, rape and a whole lotta violence and still have it infused with genuinely heartfelt sentiment? If you’re maverick director Takashi Miike, the answer is abso-fucking-lutely! Just like other Extreme Cinema films like A Serbian Film or Irreversible, Visitor Q is not actually a horror movie but is an incredibly horrifying drama that goes way beyond the boundaries of most horror films in terms of content. So, how does all this shock value content actually marry with a sentimental core? Well, let’s discuss.

I do want to mention before I start, that while I’m not including spoilers, I do talk about quite a few plot points, so if you want to go in completely fresh, you’ll want to track down a copy and watch it first.

The story centers around the Yamazaki family who, it’s safe to say, has a couple of issues to work out. Patriarch Kiyoshi (Ken’ichi Endô) is obsessed with trying to create a documentary special for TV that takes an unflinching look at what’s really going on with Japanese teens today, especially in regards to bullying. His son Takuya (Jun Mutô) is the victim of severe bullying and takes his rage out on his mother Keiko (Shungiku Uchida) who in turn prostitutes herself to afford the heroin she needs to cope with the abuse. Kiyoshi’s teenage daughter Miki (Reiko Matsuo aka “Fujiko”) is a runaway turned to prostitution whom Kiyoshi interviews for his documentary in the opening scene of the film. After minimal convincing, Kiyoshi is soon fucking his own daughter, and that’s where this film starts. In the midst of all this extreme dysfunction, a mysterious man known only as The Visitor (Kazushi Watanabe) inserts himself into the family’s lives (after brutally attacking Kiyoshi with a rock several times) and begins to subtly influence them in surprising ways to achieve his goal.

What’s clear from the start, is that Miike set out to utterly shatter as many taboos as possible, which he does in a variety of bizarre, grotesque and extremely shocking ways. What’s perhaps most shocking to some, however, (although not surprising to fans of Miike’s work) is how well he is able to incorporate these extreme elements into a nuanced story about a disintegrating family unit. Rather than being gratuitous, the shocking scenes are an integral part of the story and work perfectly within the heightened reality of the world Miike has created.

Despite the fact that this film features a scene where a female character literally coats a room in a seemingly endless supply of her own breast milk, the part that struck me as most bizarre when I first saw it years ago, was the fact that people’s genitals are usually blurred out. Of course this has to do with Japan’s incomprehensible anti-obscenity law that allows graphic necrophilia, incest, and unsimulated oral sex, but draws the line at showing a flaccid penis. Being that Miike is known for pushing artistic boundaries and advocating for free speech, the extreme content in this film was no doubt a commentary on the ridiculous and arbitrary nature of censorship in Japan.

Overall, this is an incredibly interesting, engaging film with an unpredictable storyline that must be seen to be believed. For fans of Extreme Cinema this is an absolute must watch, especially if you enjoyed Miike’s more well-known films like Audition and Ichi the Killer. So gather your dysfunctional family around the TV and enjoy the most unique depiction of family dynamics you are ever going to see.