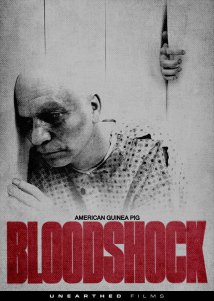 After successfully capturing the gruesome and dangerous feel of the original series with the first American Guinea Pig film, Bouquet of Guts and Gore, the primary challenge for the sequel becomes figuring out how to follow it up without being repetitive. It’s not surprising then, that Bloodshock would take the franchise in a pretty different direction from the first as it focuses on a male protagonist and is primarily shot in black and white. This is certainly a gamble, so the real question becomes, “does it pay off?” Well, let’s discuss.

The film stars Dan Ellis as a man being held in a small white room in an unknown location, who is occasionally brought out only to be tortured by a psychotic doctor (Andy Winton) and his orderlies. His miserable routine of boredom and agony is suddenly broken up by the notes that start being slipped to him through the walls from a woman in the next room (Lillian McKinny) who appears to be doomed to the same fate.

This time around, Stephen Biro stays on as writer, but taps Marcus Koch to direct. Koch, for his part, does an amazing job creating an atmosphere of bleak despair and utilizes the black and white style to create very well-crafted shots of the gruesome torture on display. Speaking of torture, the special effects in this film are also incredibly realistic, detailed and gruesome as one would expect in any good Guinea Pig film.

As far as acting goes, both Ellis and McKinny bring it, delivering performances that are vulnerable, sincere, and compelling. Winton also makes for an imposing figure with his commanding stage presence that conveys a genuine sense of malevolence. Now, I hate to call one person out, but in an overall great cast, the one part that wasn’t selling it for me was the head orderly, whose performance was just a bit too unnatural and made him stick out as an actor surrounded by characters.

Even more than the black and white style or the male protagonist, what really sets this apart from other Guinea Pig films is actually the runtime. At 98 minutes, it’s the only one of either series (so far) to actually be of a standard feature length. This is notable because it is also where the film runs into it’s biggest issues. It’s not hard to maintain an audience’s interest in the virtually plot-less torture of the original Japanese films for their 45 or so minute runtimes, but when a film of this type is stretched to an hour and a half, that starts to become problematic.

That’s not to say, of course, that this film is plot-less, it does have a definite story that picks up speed and pays off towards the end, but it is also not a film with the kind of dramatic arc that is typically found within a feature. I’m all for breaking the conventions of cinema, but you have to replace them with something that works just as well and, in this case, it unfortunately amounts to large stretches in the middle that feel repetitive and dare I say, boring. Now, I’m not saying the overall film is boring, simply that it would have been a much stronger, tighter picture if 15-20 minutes had been cut from the middle.

As Bloodshock ramps up towards the climax, it does reinvigorate itself and delivers the defining scene of the film that makes the journey really pay off. I won’t spoil it with specifics, but I will say that it utilizes the concept of a transition from black and white to color better than I have ever seen previously in film. Some minor continuity issues aside, this is an amazing and visceral scene that must be seen to be believed.

Some key backstory about the characters is actually revealed during the credits which does place the events of the film in an interesting light and adds a new dimension to the film itself. Despite this, it still falls just short of really tying the story into a cohesive package, something that a brief scene bridging the gap from the backstory to the main story would have neatly solved, especially concerning the involvement of the doctor.

All in all, an extremely bleak and interesting anti-Hollywood journey that is worth strapping yourself in for, even if the trip sometimes feels a bit too long.