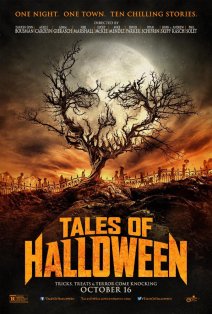 As someone who loves horror anthology films, I’ve been glad to see that they have become far more commonplace recently. From films like The ABCs of Death and V/H/S (which have both spawned sequels) to stand-alone titles like The Theatre Bizarre, Trick ‘r Treat and others, the past decade has seen a resurgence in such anthologies. But they aren’t just more plentiful, they are in fact better than ever and the short film format allows filmmakers the freedom to take even more creative risks than they would in a feature and can make for some very interesting watching. So, in keeping with this month’s Halloween-themed reviews I figured what better time than now to break out Tales of Halloween and see how it stacks up against the other anthologies.

Any time you have a collection of shorts there is bound to be a variation in quality but the important question is “does the overall experience work?” In the case of Tales of Halloween, there are ten short films all from different directors and there are certainly highs and lows to be found throughout. Some segments like ‘Ding Dong’, which is a contemporary spin of sorts on the Hansel and Gretel mythology, simply fall flat and come off as far too cartoony to be scary or engaging. On the other hand, the segment ‘Trick’ in which a group of adult friends are terrorized by a gang of violent trick ‘r treaters is not only delightfully gruesome but also features the most genuinely shocking twist in the anthology and is without a doubt the darkest entry. Also on a positive note, the segment ‘Friday the 31st‘ really goes for the throat with a gruesome, balls-out entry that features aliens, a deformed killer and a whole lotta wonderful carnage.

Some entries start off one way and finish on an entirely different note. ‘The Night Billy Raised Hell’ about a kid in a devil costume meeting the devil himself feels a bit too silly throughout but then is saved by a solid twist at the end. Conversely the entry ‘Grim Grinning Ghost’ about a young woman stalked by a malevolent ghost as she walks at night does an amazing job building tension and dread throughout but is undercut by a weak final reveal. The rest of the segments fall somewhere in the middle but overall are fun, entertaining and bloody enough to keep you watching.

Now, if you are having trouble figuring out the title of the particular short you are watching or even differentiating one from the next, don’t be surprised because aside from the opening title sequence there is absolutely no information given about the name of the segment that’s playing. At first this seemed a bit odd for an anthology but then it became clear that they were doing the film in the same style as Trick ‘r Treat where the separate stories all flow together into one cohesive narrative. However, this film was less successful in that regard and it still feels like isolated stories that occasionally feature cameos from other segments but don’t really flow together as one solid piece. If they had kept them more clearly separated like The ABCs of Death it would have been more successful.

In the end, there are certainly differences between the stories but they all to play at about the same tone. Unlike The Theatre Bizarre which would sometimes delve into territory that was hopelessly dark and dismal (my favorite parts of course) Tales of Halloween stays relatively light-hearted and doesn’t really push the envelope far enough to be genuinely horrifying. That being said, the reoccurring theme of children being abducted that plays throughout many of the stories is itself a very horrifying concept, even if it is mostly played for laughs in this film. Bottom line, this is an entertaining collection that may have some flaws but is certainly a worthwhile way to pass the time as you crack open a few seasonal beers.