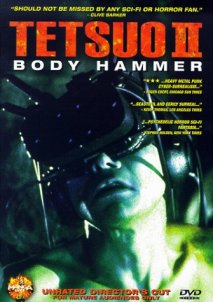 When it comes to sequels, making one for Shin’ya Tsukamoto’s original cyberpunk masterpiece Tetsuo must rank up there as one of the most difficult to pull off. How to stay true to the unbridled insanity of the original while at the same time taking the story, such as it is, in new and interesting directions? I will say, there certainly were some big changes here. So how did it fair when stacked up against the classic first entry to this insane universe? Well, let’s discuss Tetsuo 2:Body Hammer.

First off I should mention that this isn’t actually a sequel but rather a reimagining of the original story. Tomorowo Taguchi is back, playing another “salaryman” who this time goes by the name Taniguchi Tomoo. The film actually abandons the gleeful insanity of the original to follow a more standard plot structure this time and, even more shockingly, is in color.

Taniguchi is simply a meek businessman who lives a normal life with his wife and son and, other than not having any memories from before he was adopted at the age of eight, has nothing particularly unusual about his life. His normal life is shattered (obviously, otherwise there’s no movie) when skin-head thugs kill his son and shoot Taniguchi with a strange metal gun. He is then taken to an industrial building where his mind is experimented on to provoke the release of the metal-morphing powers, that he now possesses, in a controlled environment. That is until things get out of control.

There is actually a lot going on with the plot in this film and rather than the balls-to-the-wall mania of the original the pacing this time goes through a series of lulls and sprints. Tsukamoto provides more explanation into the origin of the powers as well as the characters’ backstory . He also delves into the motivations and back-story of a secret society of skin-heads, a new addition in this outing, that wants to possess the metal-transforming powers for themselves. And indeed it makes sense to want to use it as a weapon as the transformation manifests as controllable protruding guns this time around rather than the metal-tumor chaos of the first one. So, the transformed are more Terminator, less metal-plagued monster.

There does seem to be an attempt to widen the audience as the plot more closely resembles that of a standard action film rather than an abstract art piece. There is even a (possibly unintentional) homage to the first Alien film. Ultimately, this shift in style is to the detriment of the film itself creating a very different experience from the kinetic madness of the first film.

That’s not to say there isn’t a lot to love about Tetsuo 2. The film is still far and away much more interesting than the vast majority of films out there and there are many scenes where Tsukamoto uses time lapse effects and stop-motion animation to remind you that you are still in fact watching a Tetsuo film. He also takes advantage of the fact that the film is in color to guide the emotional journey of the viewer from the muted, dark, metallic blue of the skin-head’s industrial lair to the brighter yellows of the calmer outdoor flashback scenes. And the story itself is complex and unsettling with interesting twists and without clearly defined heroes and villains or easy answers. It may follow more of an action plot structure than the first film but is far weirder and more interesting than anything Michael Bay will ever direct.

The largest challenge that Tetsuo 2 faces is it’s inevitable comparison to the original, superior film. That being said though, it’s certainly a trip worth taking, if you can find it. But track it down you should because Shin’ya Tsukamoto has once again taken us down the rabbit hole into a dark, fascinating world of metal-infused insanity.