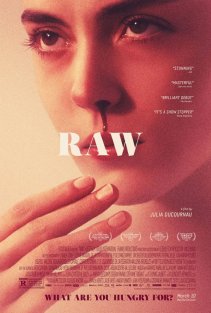 Sometimes the trailer for a film is so compelling and intriguing that you instantly know it’s a film you absolutely must see. For me, Raw was such a film and the dark, unusual, and clearly well-shot movie that was promised was one that I couldn’t wait to watch. Of course, a great trailer followed by months of waiting can certainly raise expectations for the film itself so the question is, did Raw live up to the hype and deliver on the high promise of the exquisitely made trailer? Well, lets discuss.

The story follows Justine (Garance Marillier), a young woman from a strict vegetarian family, who is going off to the veterinary school that her rebellious sister Alexia (Ella Rumpf ) already attends. After being forced into eating meat in an initiation ritual, Justine soon begins to have an insatiable craving for flesh that she struggles to control. That’s about all I want to reveal about the story because, truly one of the best things about it, is the shocking twists and unpredictable plot.

What’s instantly apparent when watching this film is just how incredibly well made it is. The cast, primarily consisting of young adult actors, is absolutely flawless and their strong, realistic performances are a huge part of what makes it successful. The lion’s share of the credit, however, belongs to writer/director Julia Ducournau, who’s brilliant script and assured direction, are responsible for creating a film that is visually stunning and thoroughly compelling.

It’s utterly amazing that this is Ducournau’s debut feature because, the way she skillfully balances the elements of a coming-of-age drama that’s infused with horror, is nothing short of masterful. The story is not only very different from what I assumed it would be going in, but also remained unpredictable throughout and was certainly a far cry from what Hollywood would have done with the material. The twists in the story make for some surprisingly shocking moments and the subtext about discovering one’s sexuality (and the horrors that go with it) is expertly infused into the story.

The fact that Ducournau relied on real animals and practical effects over CGI adds to the overall realism and, while this is not an extremely bloody film overall, the gore effects that are present are pulled off perfectly. All in all, this is a film that actually does live up to the promise of it’s trailer and, although it’s not exactly a horror film, it’s a horrific and beautiful journey that is very much worth taking.